Simon Batchelor of Gamos writes on his experiences with the Dar Es Salaam rapid transit system (the DART).

When SAMSET started in 2014, its first network meeting was in Dar Es Salaam alongside an ICLEI conference.  At the conference there was an offering by the mayor of Dar for attendees to have a field trip to see the Dar es Salaam bus rapid transit system called DART.  At that time there was little more than road works to see, but what was impressive was the ambition to carve out whole highways that would be bus only roads.

Like most city wide infrastructure projects, the system has been in the planning for more than a decade.  Discussed in 2003, JICA encouraged Dar municipality to consider the system, and designs started in about 2005.  Consultations with the public and those affected by the construction, social and environment impact studies, ongoing economic feasibility studies all take time, so it wasn’t until 2012 that the road works started to appear.  It will eventually be 6 phases, but phase 1 was completed in April 2015 (about 6 months after our first network meeting – so we didn’t get to ride it then).

When looking for some of the facts surrounding the system, I came across a document – “What necessitated establishment of a BRT system in Dar es Salaam?”.  Their answer…”When you have a swelling city population and you find yourself in the teeth of agonizing transport problems and hitches, the logical safety valve is to have a type of public transport that uses a passenger medium uninterrupted. As the name suggests BRT is a mode of public transport that uses rapid trunk buses. BRT is a huge-capacity transport solution to public transport problems the City of Dar es Salaam faces. The BRT system operates in a way quite similar to a tramway. In the latter passengers board trams while in the former passengers ride on huge buses plying on exclusive lanes.”  (My emphasis)

Interior of one of the DART buses. Image: Simon Batchelor

So when we were in Dar for other business last week, we took the opportunity to ride the buses. Phase 1 is said to be a single 23 km line from a station called Kimara Terminal down to the CBD.  However we found ourselves at the end of a branch line, at Morroco Terminal.  The system is said to have cost around $180 million so far.  Since there are branches one has to choose the right bus. We got on at Morroco, and were advised to take the No 3 bus in order to get to the Zanizbar ferry terminal. 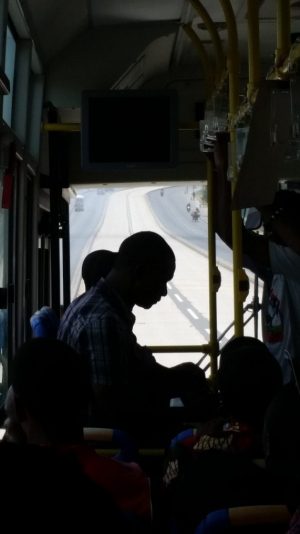 It runs some 140 Chinese made buses that in themselves are unusual.  Each station or terminal sits raised at about stomach height.  The buses have floors and doors at that height on the right hand side.  On the other side for emergencies they have one door that has steps down to road level – mainly for the driver since no one ever gets on that left hand side.

The terminals have gates and one purchases either a seasonal ticket and gets a Contactless smart card or at the counter and gets a printed ticket with a bar graphic.  Placing the ticket under the gate scanner gets you through the gate or like many other rapid transport systems in cities one taps the card and the price of the journey is taken from it.  At the moment there are staff to help people get through the gates as the whole system is still being nurtured among the general population.

We entered the bus at one end of the line (Morroco), and found a clean air conditioned No 3 bus that would not have felt out of place in any modern bustling city.  By mid journey the bus was full and the heat radiated by so many bodies had overwhelmed the air conditioning and people had opened the windows.  This was not rush hour but was middle of the day, so I can imagine it gets pretty cramped at peak times.  However while it declined in comfort by the end of the journey, it was indeed quick.   We had sat in a taxi the day before for an hour in a very slow moving traffic jam; this trip took us only 20 minutes.  It felt impressive to look ahead of the bus and see the completely open highway.

We have talked a lot in this blog about the growing needs of municipalities, and SAMSET is focused on long term solutions.  Dar es Salaam is a fast growing commercial capital, producing 70 percent of Tanzania’s gross domestic product and is the hub of economic activity with an estimated daytime population of close to six million.  Analysis in 2014 showed that some private 5,200 passenger buses were operating on the city roads, and traffic congestion was already having an impact on the economic well-being of the city.  A metro was not possible, and the rapid bus system seemed viable.  It is said it will transport 300,000 a day in this interim phase.

Having now ridden the system, I can see how it can avoid the traffic problems.  I think it probably already gets overwhelmed in rush hour and be uncomfortable to ride at those times (much like most mass transit systems in most capital cities!  I try to avoid the London underground at peak times!).  I wish the municipality of Dar the best for its subsequent phases and will be interested to see its longer term use of lower carbon buses.

Bernard Tembo from UCL writes on the benefits of bus rapid transit (BRT) systems and their integration into new urban planning ventures.

In our last article, Africities, 2063, and Time, Simon Batchelor and Sumaya Mahomed looked at the disjoint in project timescales used by donors, CSOs etc. and the municipalities. They elaborated the complexity process and stages that projects have to go through for them to see light of day, stating that instead of the commonly used timescales of 1-3 years, most municipalities’ projects have a longer timescale of between 10 to 30 years. This article gives an observer perspective on how town planning approvals and the Bus Rapid Transit (BRT) systems in South African cities link.

Major South African municipalities have embarked on projects that will not only improve the efficiency of the transport network but also reduce emissions from the transport system. Municipalities such as Durban, Polokwane, Johannesburg and Cape Town are implementing BRT projects.

In Polokwane for instance, this project targets the areas that are densely populated. These area is currently serviced an inefficient public transport network and private transport. The City experiences loss of man-hours during peak time because of traffic jams. The City therefore, hopes that by providing a safe, reliable and efficient public transport network, the citizens’ social and economic livelihood could be improved. 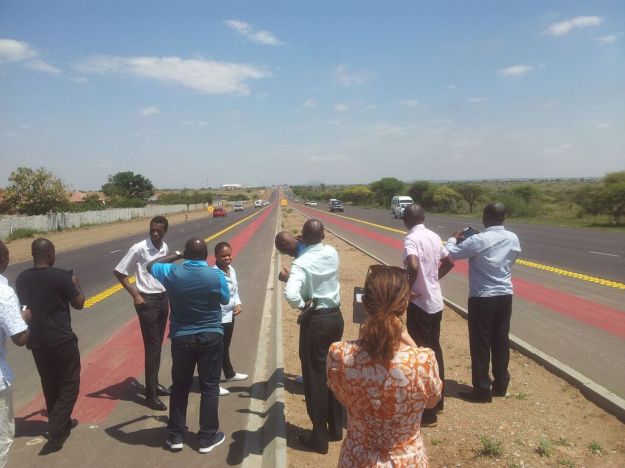 The City of Cape Town on the other hand has an already functioning BRT system, not covering the whole City though. One of the objectives of this system is to encourage modal shift: from private to public transport system. In one section of Cape Town called the Northern Suburbs, there a new shopping mall called Bayside Mall. This mall is serviced by a well-functioning BRT system. However, despite availability of this functional public transport system, the shopping mall has a huge private car parking space (lot).

This raises questions about how well coordinated internal City development approvals and plans are: on one hand you want to encourage use of public transport yet on the other incentivising private transport system. It is an established fact that building infrastructure such as malls have a long life span (more than 40 years). And secondly and perhaps more importantly that because without putting in place stringent measures, private transport will continue to grow in the City. As private transport offers better safety and convenience for the user. Apart for convenience and safety, private transport is perspective as a symbol of esteemed status. With an increasing middle‑class, most transport users particularly those with enough disposal increase to shop in places like Bayside Mall will most likely desire to use private transport.

It would therefore be important that the City authorities relook at requirements for new developments before they approve building plans. One such requirement would be size customer parking space in shopping malls. I am aware that they are a lot of power and political games at play with such developments (shopping malls that is) but there is always a first.

This is an interesting challenge of synchronising long term plans with short term desires. A challenge that cannot be solved using a one size fits all approach, it requires consented efforts from all stakeholders.