The SAMSET Project hosted its second continuing professional development course at Victoria University in Kampala, Uganda from the 7th – 11th November 2016. The title of the course was “A Practitioner’s Insight into Urban Energy Planning, Implementation and Management”, and aimed to cover the issues that practitioners (such as urban planners, architects and municipal government officials) face when addressing urban energy management.

The first day of the course was focused on fieldwork in and around Kampala, aiming to give attendees experience of the issues facing Kampala in the urban energy and sustainable energy spheres today. The first part of the fieldwork focused on the central market district in Kampala, and involved a walking tour led by local partners through the market area and central business district of the city. 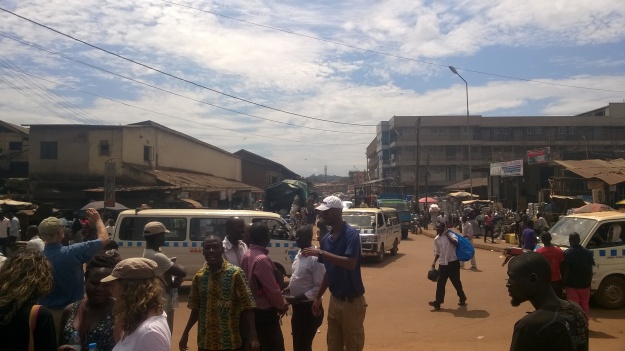 To say that the market area in Kampala is busy is an understatement. Passage through the area is only really possible on foot in some places, and even then only when avoiding the constant movement of goods and people through the narrow streets of the market district. The main roads in the area are extremely busy, with heavy goods vehicles mixing with matuba taxis and boda-bodas (motorcycle taxis) to create effective gridlock at some points in the day. The sustainable energy market, however, was on show in many areas, whether that be hole-in-the-wall shops selling small solar home systems, to street vendors selling improved cookstoves and cookstove liners. The challenges to urban transport were clear to see in the area, particularly how best to facilitate the movement of goods and people in the centre of the city, without stifling the bustling engine of economic growth that the central market district provides to the city.

The second phase of the CPD course fieldtrip involved a visit to a local landfill site on the outskirts of Kampala. This site processed a significant amount of the solid waste in the city, including from official waste management collection services and informal networks of waste collectors. The site also supports a network of informal waste pickers and processors, collecting items such as plastic waste for recycling. A recent initiative at the landfill has seen a PTFE processing facility constructed through collaboration with Chinese investors, although this site has not been without issues. In particular, while investment in the processing facility has created employment at the site, redistribution of profits from the facility has not occurred, with very little being reinvested in the site or community of waste pickers servicing it.

The issues facing solid waste management in large, primary cities such as Kampala are myriad, and the effects of this were plain to see in this phase of the trip. Collection and processing, as well as sustainability in operations, are both issues that need to be addressed by urban planners when considering municipal waste issues.

Josephine Namukisa from UMU writes on the challenges and discoveries made during fieldwork for the SAMSET project.

At the heart of the process of generating a State of Energy Report is field surveys to garner an energy picture. Surveys may range from questionnaires and one-on-one interviews. The latter have been quite beneficial to the SAMSET research team in Uganda as a means of carrying out preliminary data collection. The experiences of carrying out interviews in Jinja and Kasese municipality were enriching in many cases sometimes far more than the data collected eventually and are therefore worth reminiscing about. We encountered lessons on formality versus informality and at times had to slow down and demystify energy concepts. Following are two encounters.

Formality Vs Informality
Clad in jeans, canvas shoes and rack sacks, we arrived at Jinja Municipality Offices ready for a day in the field, which because of our seven months experience so far, we approached with open-mindedness. We would be as flexible as need be and handle every interview as it came although with one constant; to walk away with the most credibly-possible data in keeping with the project ethos. In our estimation, the task would be even easier because an official from Jinja Municipality would be accompanying us into the field. Could we get more credible than that? In our minds, we saw our usually long verbal introductions highlighting organizations that our respondents hardly know about shortened and their responses lengthened simply because of the trust created from dealing with their own. We were in for a rude awakening.

At the municipality head quarters, we were ushered into a large office with leather sofas and a large mahogany desk behind which our soon-to-be “field assistant” was seated, his secretary was rapidly typing out a letter of introduction nearby. We sat quietly for an hour waiting for the official business to be completed before heading out into the field. Our first stop was the UMEME office and the moment our suit-clad field assistant handed over our introduction letter to the Manager and uttered a short “We are from the Town Clerk’s Office”, it was like a brass gate fell between us and the Manager because she visibly acquired an intensely formal stance, ushered us into her office and for the next fifteen minutes explained to us the procedure of carrying out research at UMEME field offices, inclusive formal letters to the Head Office, authorizations and other requirements that in her estimation would take no less than a month. Case closed. Yes our introduction was short, her answer long but both of them absolutely futile.

In Kasese a week later, we were the wiser. Again armed with field clothes, lengthy introductions and the attitude of researchers and not government officials, we made what we referred to as a “courtesy call” on the UMEME office. Again we were offered seats but not so that we could be briefed on protocol but rather on the goings on at the office. The Officer in charge then called his Area Manager informing him of our visit and even though the manager was skeptical at first, that being his first month in the position, on meeting us he relaxed and plunged into a lengthy and fruitful discourse about his work. When we told him about an earlier visit to HIMA cement and Mobuku Power Dam, all things he cares about as part of his work, he opened up about electricity service delivery in Kasese Municipality, the main consumers and strategies for distribution and future projects such as OBA – a project to connect homes for free. Yes, clearance from the Head Quarters in order to access more detailed information was talked about but we walked away information-richer than was the case in Jinja

Unpacking the Bill
One old lone figure on the verandah of an aging post-colonial house is watching the road, her maize cobs spread out in the sun to dry in the large compound of her daughter’s estate- the daughter who lives in Kampala but pays the bill monthly; utility and Dstv bills, the latter without fail so that her twin daughters, the old woman’s grand children can be entertained hourly, daily, weekly and monthly.

Our arrival is greeted with wariness; the team of two who could be anything from walkers who have lost their way, door-to-door evangelists or bill collectors but certainly not researchers into that which eludes her on a monthly basis; the green and white UMEME bill she cannot read because it has no Luganda or Lusoga translation. However, once we introduce ourselves as SAMSET researchers, enquirers into Long Range Energy Alternatives; planners with a vested interest in her energy future, the bill becomes a prop that sets us on common ground. The twosome is the old woman’s dream come true; a magnifying glass to help her make sense of what is eating up the largest chunk of the allowance her daughter sends monthly. She, on the other hand is the bane of the research’s existence; a single micro entry with no records to enter into a statistical sheet. But we take the chairs she excitedly offers, retrieve our pens, magnifying glasses and Luganda vocabulary because for the next hour we shall translate Kilowatt hours, amps and appliance types.

“Aaaah!” it finally dawns on her after no less than an hour; the revelation that the electricity bill has been accurate all along. “But what can I do to keep it down?” The old woman enquires, not sure which would be wiser; switching off the fridge and forfeiting ice-cold water or denying her adorable granddaughters two hours of Cartoon Network a day. That, we leave to her discretion and armed with a table of calculations and statistics; the copy we quickly made after she requested an original she couldn’t read, we head off into the sunset in search of more homes to survey.